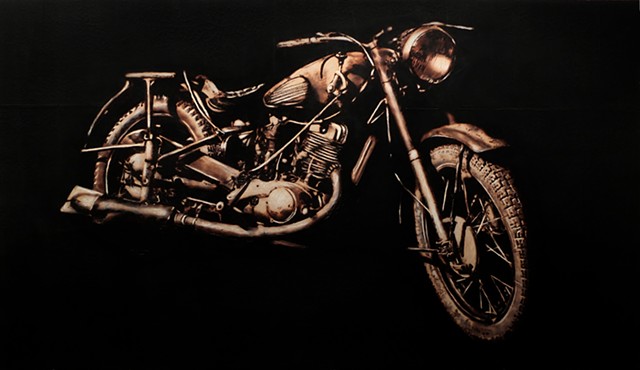 After a quarter century of making art in one form or another, an artist can start wondering if any of it makes any difference. I began this journey with the high hopes of somehow changing things-- hopefully for the better. It takes an enduring faith to continue producing objects in an already object saturated environment and trying to balance substance with purchasability in order to survive in a capitalistic society.

I continue because I am still in awe of the ability of artists to transform pure energy in the form of creative thought into a tangible physical form-the alchemy of art. This is the gift of the artist to the larger culture whether one makes a living off their work or not. Some artists make lots of stuff which sells well but has little substance; some make a small amount of things which carry deep philosophical meaning for the few who care to take note. I seem to be somewhere in the middle. I am not averse to making a fortune off my work but that doesn't seem to be what fate has planned. Maybe it's better to have to work for one's living--it puts the edge on.

My best work (in my humble opinion) comes about when I simply follow my hands and forget my head. I happen to like my hands. I like them because they're big and, well, dexterous. They often do things seemingly by themselves, making me feel like a spectator watching a couple of digitized beings going about their tasks, oblivious to the "eye in the sky".

This idea of a detached observing of one's attached appendages can be extended to the need in our culture for more self-awareness. I mean this in the sense of becoming more aware and caring of the impact of one's actions on their own life and the lives of others and the environment-- as they are happening. There is a need to "step outside one's self and watch one's life as if from a "close remove" and steer one's own boat rather than be tossed about by the waves of life. (That last line was from my hands) This, somehow, brings us to the work before you.

My work since 1995 has utilized burning. Either rapidly or slowly, everything burns. The stars, planets, rocks, earth, plants and animals, molecules and atoms, quarks and maybe tachyons--everything that springs into tangible existence starts being consumed by the oxidation of time. This idea has informed my work since I first moved from skill building to the "aware expression of idea". I don't know why this is so, it just feels right. (Some say, that I'm really an arsonist at heart and have simply found a polite and productive way to deal with that tendency.) My use of burning is best summed up in a review by Jerry Cullum in the Atlanta Journal Constitution.

"The (burning) technique would be no more than admirably inventive if it didn't fit so prettily into Painter's views on transience and fragility. his inclusion of single-word Latin captions such as "elegia" or "infinitas" turns his individual images into allegories of what endures and what perishes."

The images that I use are of fragile entities. This of course, could be just about anything but some forms carry more symbolic meaning in our culture than others. The use of a fragile autumnal leaf for instance, carries more fragile associations than say-- a steel beam. Most of the images that I use also emphasize an inherent skeletal structure which is also a means of furthering the fragile nature of existence. In many of my early works I actually used the skeletons of cattle, birds and various other animals. I have since moved on to the illustration of the skeleton which has proved more lucrative and less stinky.

In the more recent sculptural works I have brought the skeleton to the forefront and yes, burned it. This action creates a parallel body of work which allows the content to move forward while building on past ideas. In many of the panel works I have used the image of birds, moths, balsa wood model airplanes, dried roses, dried leaves, grass, wooden boats and violins. All these images have in common an obvious skeletal framework (the violins have what could be considered an "exoskeleton") In creating my charred sculptural pieces I have taken this fragile skeletal idea and made it even more vulnerable by projecting it into three dimensional space. Now, back to that "oxidation of time" thing.

The abiding social theme of my work is that life is both fragile and tenacious. Life survives in the midst of adversity and throughout time. An individual life can be ended by a seemingly small event or endure unbelievable hardship to rise up and continue but "LIFE" in the larger sense goes on. The fragile entities that I present in my works are an attempt to focus on this point. They are. They exist. They continue in the midst of the fire that surrounds them. We live in the point between future and past--in constant motion. If one can become aware of that then one can objectify one's own experience and in so doing become one's own captain.

The first objective in any "plastic" artwork is to engage the eye. I do hope that most viewers will find this work to be firstly -- visually engaging. I find that even after creating hundreds of pieces that I still get lost in the actual production and rendering of an artwork. I still love to watch my independent hands do their thing even while my mind is moving on to the next idea. The initial conception of the idea is still a "big bang" moment for me. I could be quite content with that but then I wouldn't have the pleasure of sharing that idea with others. That is what all this "stuff" hanging on the walls is about.